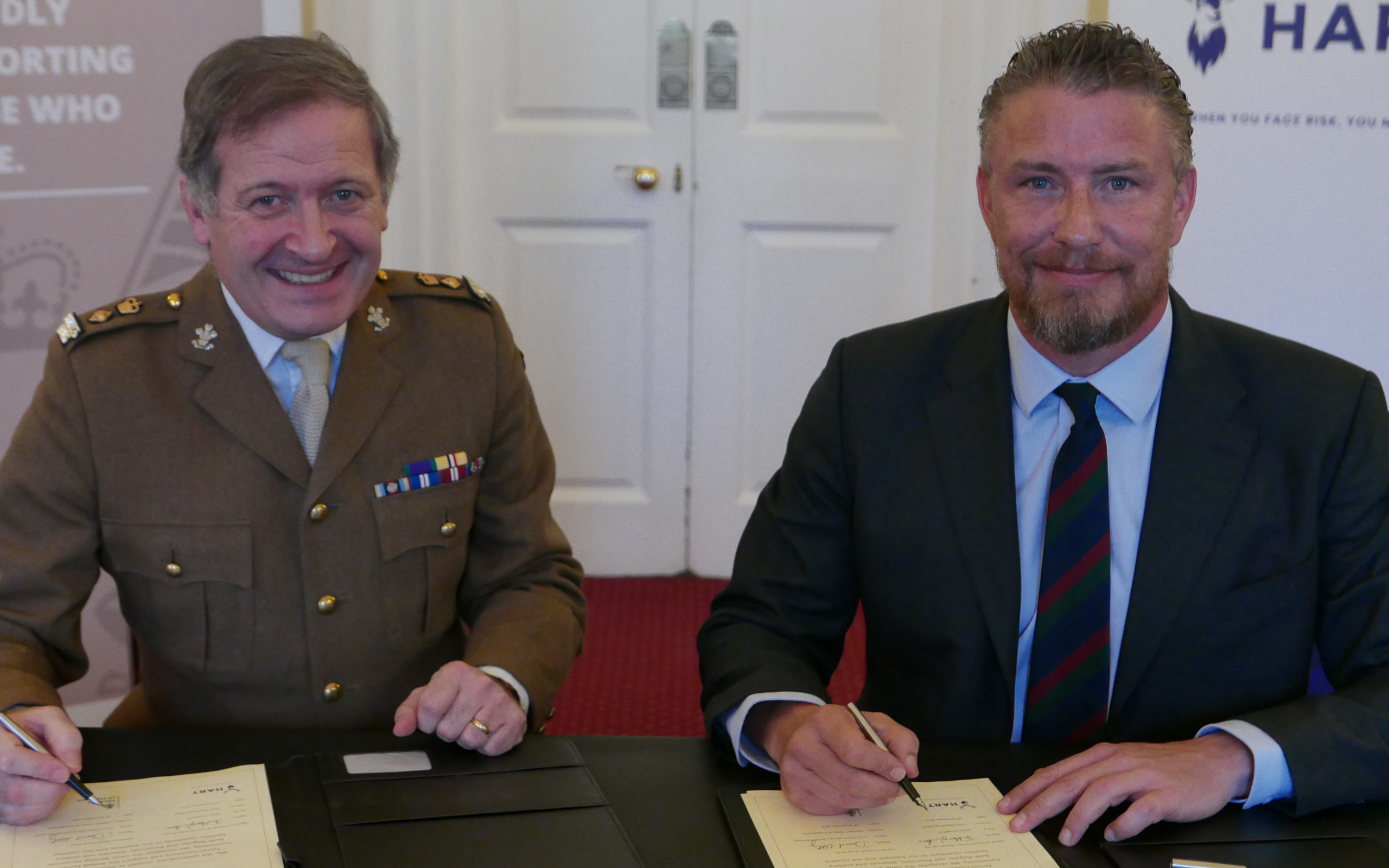 The signing of the Armed Forces Covenant, an initiative by the Ministry of the Defence to rally support from the business and charitable sectors for the armed forces community, was for Hart, an important formality that echoes its modus operandi at many levels.

Formalising and Cementing an Existing Ethos

In an address at Westminster’s Horse Guards in London last month, Hart Chief Operating Officer, James Houghton, emphasised Hart’s existing support of the armed forces community, a philosophy that dates back to 1999 when founder, Lord Westbury who served in the Scots Guards and Special Air Service (SAS), established the company.

“Since its inception, Hart has instinctively supported military veterans, be they from the British Armed Forces or from other nations, so we are delighted to further entrench this ethos and to formalise our relationship with the Ministry of Defence,” said Houghton.

The new Armed Forces Covenant provides a critical bridge for veterans in their transition into the civilian world, said Houghton.

“In terms of their value and skill, often veterans don’t realise their own potential value in the commercial space, and this can be a failing of the commercial sector, who simply do not understand the scope of a veteran’s experience. However, when a veteran is correctly mentored, the value that they bring to the organisation, and to their own personal growth, can be exponential,” said Houghton. 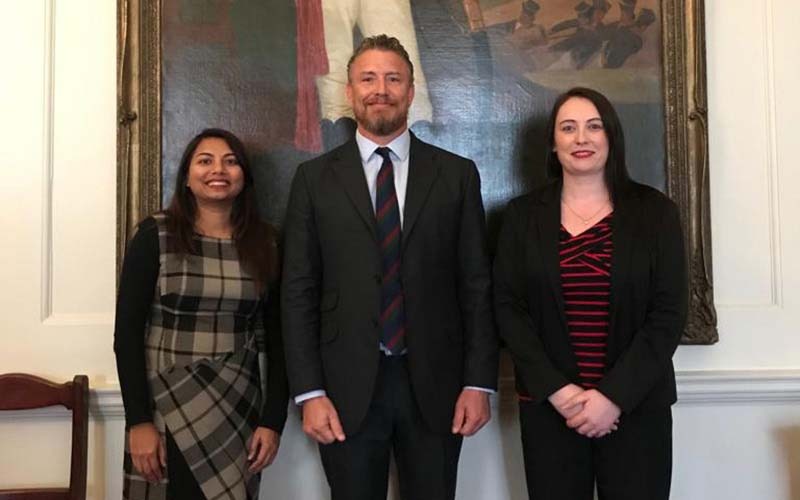 Hart’s Contract Manager, Kim Ewart, a veteran herself and the driving force behind the Armed Forces Covenant signing, knows only too well the challenges still faced by many service leavers transitioning into civilian life today.

“Even though the majority of ex-forces individuals have a seamless transition, I was one of more than a few, who sadly faced great difficulty. The support provided from Hart during that time was invaluable and I count myself incredibly fortunate to have experienced first-hand how much Hart value and invest in its people. It was a very proud day, both personally and professionally, to see Hart’s already- established support become officially recognised,” said Ewart.

The Challenges of Transition

Houghton, too, recalled the challenges of his own personal journey in transitioning from the SAS to civilian life in 2004.

“At that time there was no transitional preparation and interviews in the civilian space tended to yield the same disappointing results. While there was an acknowledgement of my successful military career, there was a failure on the part of the organisations I spoke to, to translate how my skills could transfer into another business sector. Employers could simply not see beyond my operational military experience.

According to Houghton, doors were shut, even by organisations hosting ex-military members who were reluctant to stake their own reputations by way of association, or to open a gateway that would no longer make them unique to a company.

“Advice from both ex-army personnel within the business sector and resettlement organisations were lacking. Looking back, I think that what the commercial sector didn’t realise at the time, was the need for champions or patrons, within businesses for newcomers.

“And even though the security sector was more of a natural progression, being a contractor’s market that mainly employed people as close protection officers, it too failed by not investing in people by simply translating valuable military skills for the commercial sector,” said Houghton.

This is where Houghton believes that Hart as an organisation successfully differentiates itself.

Hart as an Employer of Choice

“Firstly, when we recruit people to come into the business, we look for potential based on talent. Thereafter, there is an important induction and mentorship process where newcomers are linked to someone who has been in the business for a while. Of course, issues inevitably arise, but we have fostered a culture that supports a learning process so that when mistakes are made, they are analysed, discussed and evaluated with recommendations. I think it helps that this is done at the lowest possible level, without escalation and creating bigger problems,” said Houghton.

Hart takes pride in its policy to promote from within where possible, said Houghton, who attributes this to the company’s extensive investment into its people, as well as the family-like culture in which he has seen people thrive. And these are some of the reasons why he believes that Hart should be the employer of choice for both ex-army and civilians in the security industry.

“While the DNA taken from the army is incredibly relevant to our business, we have a lot of people with commercial experience who are able to transfer business knowledge to veterans. Not only does this make the transition smoother for the individual but it is also productive for the business. At Hart, the management team are a 50/50 split between commercial and military experience, which is proving to be a good balance,” said Houghton.

Being mindful of the rigorous operational experiences to which ex-military personnel have been exposed, is another key focus area for Hart that runs parallel to the Armed Forces Covenant goals.

“Hart and the Chelsea Group as a whole, are dedicated to being responsible employers through improving the lives of physically or mentally wounded members of the armed forces community. We do this, amongst other things, by supporting various organisations like 65 Degrees North or Trauma Risk Management programmes by March on Stress and courses like those offered by the Leadership Trust.

“Another way we give back is through sincere, ongoing engagement with army personnel who are embarking on their transition to civilian life. I think that all Hart employees do well to spend time consulting with their army peers regarding the commercial sector,” said Houghton.

In conclusion, Houghton expressed Hart’s ambition to increase its support of families of veterans.

“The families of veterans, and in particular those who have experienced loss through service of a loved one, is something that we as a company would like to get more involved in. Some of the ways this could be achieved is by employing the spouse of a veteran where possible, or by creating internship positions for children of lost veterans,” said Houghton.

Hart joins a growing list of businesses and charities who have signed the Armed Forces Covenant, added Ewart, who will be managing the MOD relationship and reinforcing Hart’s gender-equal attitude.

“The enthusiastic response to the covenant truly demonstrates the support of the business sector to consciously alter existing human resource policies and action their choice of the many recommendations outlined in the covenant guidelines.

“Already, the covenant is proving to be more than just a document. We have been impressed by the dynamic interaction and opportunities that it provides for lively engagement with not only business, but also the media, government and charitable sectors,” concluded Ewart.

Organisations and charities who wish to find out more, or make their pledge to the Armed Forces Covenant, can contact the Covenant Team at AFCovenant@rfca.mod.uk